Have you ever been on a team where the boss presents a new idea and looks around the team for a response and there is this one guy that breaks the silence by saying “What are you drinking boss? That idea is a bunch of crap” well maybe he was a little more polite but still the message was clear. Everyone else holds their breath waiting to see what happens.

For most people the desire to be liked and accepted leads us to have an overwhelming urge to conform with a leader (or the group majority) to maintain harmony, regardless of what we might think.  Sadly most people also have a very strong subconscious desire to be agreed with, especially leaders. When people agree it affirms their leadership and those that challenge are perceived as challenging them personally – rather than the idea itself. 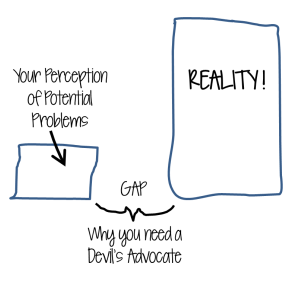 This all combines to create another horrible dysfunctional team, one where there is an absence of conflict. Well, apart from that one person stupid enough to speak their mind, and they’ll likely be fired soon, then we can all get back to agreeing with each other.
Now I am making light of it, but a leader that is able to understand conflict as healthy is rare, and one that can, in practice swallow pride and engage in healthy debate is rarer still.

The problem though is that even with that rarest of leaders there is an invisible threat, the leader himself knows that he values conflict, that to be truly successful ideas need to be freely expressed and freely challenged, but everyone else can see the threat that is invisible to the leader, they know he still holds the power even if it is not overt, that invisible threat still causes teams to hold back and to create a false sense of harmony.

You may think that I am overstating the point but just think back over your career and how often does the yes-man or yes-woman get promoted over the more capable but outspoken. How many leaders surround themselves with people that will affirm their decisions rather than pushing for more. It is natural and normal to like those that agree with us far more than those that push us. But get over it! That behavior is limiting your team.

My solution to this problem is for every team to have an maverick, someone that is Not afraid, someone who will break the harmony spell and get the conversation started,  push ideas to be better, force plans to stand up to scrutiny, to trigger others into sharing their opinions. If you are lucky you have one already.  Turns out every team I’m on has one 🙂 but if your team doesn’t already have one (or more than one) then take turns, at the start of a meeting roll a dice, select one person to be devil’s advocate and it is their role to challenge ideas look for flaws or weaknesses, this will push the team to be better and can do so from the safety of an assigned role.

The term a devil’s advocate describes someone who, takes a position he or she does not necessarily agree with (or simply an alternative position), for the sake of debate or to explore the thought further through discussion.

There is a difference between healthy debate and someone that is just obtuse, and conflict alone will not get you to results. But an maverick that is also a genuine team player is invaluable on a team. I’m not talking about jackasses here, but people who are not afraid to speak their mind, for whom honesty is more important than acceptance.

If I had to recommend one book that would help your team become the best Agile Software Development team, it would be The Five Dysfunctions of a Team by Patrick Lencioni, the book does not even mention agility.  But in my opinion the vast majority of questions I’m asked or problems I see can be traced back to something covered in this book.

Once trust has been established the next step is to build on that trust with healthy conflict where ideas can be shared without fear, where opinions are heard and considered.

2 thoughts on “Every team needs a maverick”